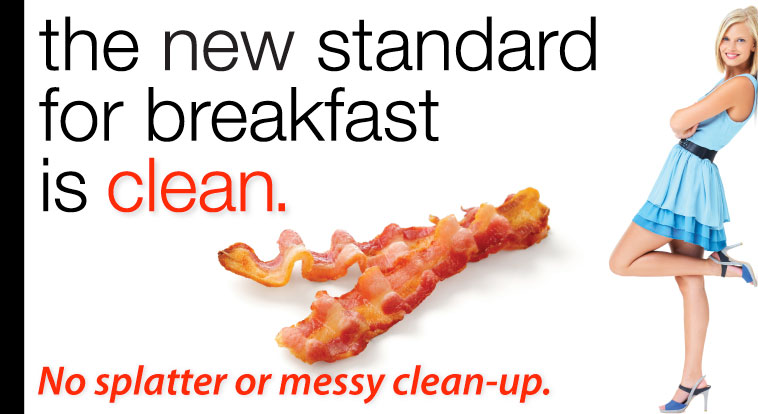 Cooking bacon is clean and easy with a Bacon Pro bacon cooker. Easy bacon are two words rarely used together, but with a Bacon Pro that's really what it is—easy bacon. It is easy in every way. You'll probably serve more freshly cooked bacon than ever before and that's OK because it is healthier bacon since much of the fat drips away.

Gone are the days of hovering over a skillet, scooting the bacon around in an attempt to get it cooked evenly, flipping it, being hesitant to look away for long or risk burning the bacon. No more pops, burns, and mess from splattering grease. No more scrubbing on a skillet or wiping off the stove-top and every nook and cranny around it. That's a lot of work to end-up with just 5 or 6 slices of bacon. Think it might be easier in the oven? Think again. When was the last time you cleaned the oven? Enough said.

Bacon Pro's two cooking racks are over 5.6 inches tall, so sliced bacon will fit with room to spare. Hold the bacon in the middle hanging it over two fingers and simply drop it down on a rack. You repeat this easy procedure until you've loaded each of the two cooking racks with 1 to 23 slices of bacon. If 23 slices are more than you need, no problem, just load it with the amount of bacon you want to cook.

Some cooks prefer to hold the bacon from one end and dangle it down in between the two cooking racks and flip the other half of the bacon over the other side of the rack. Either way, it's easy with a Bacon Pro. We've loaded as many as 26 slices of thick cut bacon weighing-in at almost 2 pounds. It cooks bacon the way you like it, with virtually no clean up. 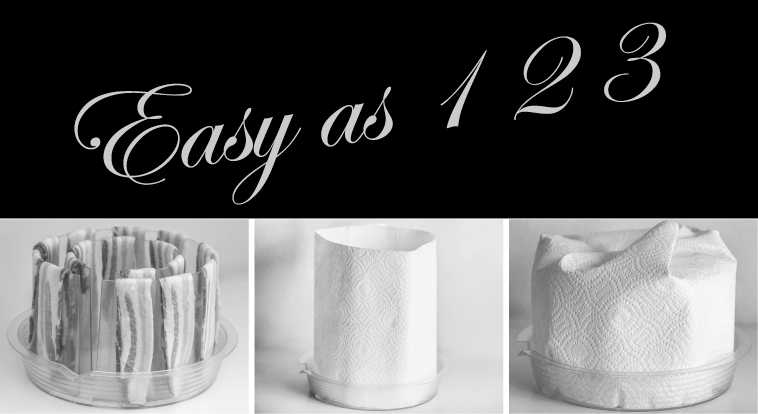 Simply surround the outer cooking rack with three connected paper towels. Three regular-size paper towels fit perfectly around the bacon and the cooker. Then, just tuck the upper portion of the towels down toward the center and place it in the microwave. Set the cook time and carry-on with other kitchen related duties.

Go to the Cook-time Calculator to get more exact guidance on how long to cook the bacon. It takes into consideration all the variables; the number of slices, slice thickness and microwave oven wattage. After the bacon is finished cooking, just remove the bacon cooker from the microwave, dispose of the paper towels and lift off the bacon. It's ready to enjoy.

Clean-up is easy too. A Bacon Pro is made with features that were well thought out. To dispose of the grease, just pour out the grease through Bacon Pro's easy-pour spout and rinse off the remaining residue. It will just flush away. No scrubbing is necessary. The Bacon Pro is dishwasher safe, so place the Bacon Pro in the lower rack and let your dishwasher do the rest. It can stand up to the harshest dishwasher detergents. If your microwave ever needs cleaning, just wipe it out, because it's a lot easier than cleaning the stove-top or oven.

You'll find that it is easy to wash by hand too. You can fit your hand and a dish cloth or sponge down in between the two cooking racks with ease. There is plenty of space for you to swirl it around in between the cooking racks. It couldn't be any easier.